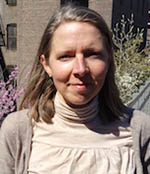 Katrina produced/directed "Traces of the Trade: A Story from the Deep North," an Emmy-nominated documentary (PBS: 2008) that follows her family as they uncover the role of their Rhode Island ancestors – and the North more broadly – in the transatlantic slave trade, and as they grapple with racism and white privilege today. She works as a speaker, facilitator, and trainer in schools, churches, museums, conferences, and workplaces around the U.S. and overseas. She focuses especially on “racialized emotions” and how to engage white folks.

She is excited to bring her dancer self together with her race work. She is among the InterPlay leaders who are co-conspiring to use InterPlay tools for racial awareness and healing. Katrina leads/co-leads whiteness workshops as well as interracial workshops, with an InterPlay framework, and also in collaboration with Afro Flow Yoga, and the Dance Exchange. Katrina has been a certified InterPlay leader since 1998.