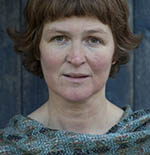 I'm a musician, performer and facilitator based in Scotland. I make concerts and music theatre shows - the latest is called 'Mairi Campbell - Pulse'. I first came across InterPlay on a recommendation and realised it was doing exactly what I wanted to be doing! I wanted to see how it would translate into Scottish culture so organised many InterPlay events in Scotland mainly and invited leaders from the US and Europe. I became a certified leader in 2016. I have found interplay very helpful both professionally and personally.